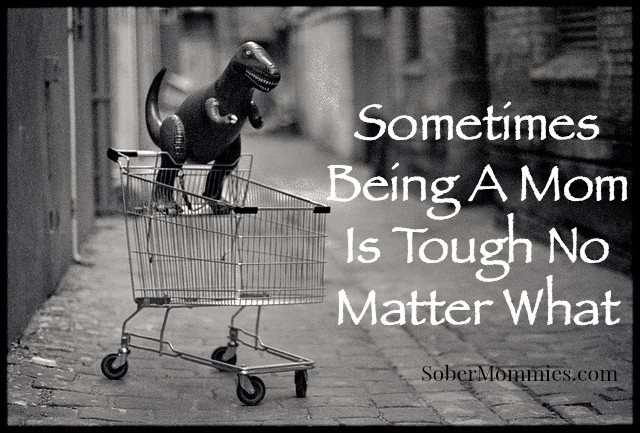 Sometimes Being A Mom Is Tough No Matter What

I’m a mom. That lady with the five kids, two of whom are probably screaming, with the other three trying really hard to pretend they aren’t with me? That’s me. I’m most likely trying really hard not to yell too loudly, because we are out in public, and I don’t want to look like that mom.

What people don’t see is that I’m a recovering alcoholic, and that my kids have been through hell and back with me.

They don’t know that I question every meltdown my children have, because I think maybe it’s because of the things I did. They don’t know how really hard I try not to cry when my eight year old wont go stay the night somewhere, because even after almost three years, she’s afraid that I wont be home when she gets back.

People don’t know that I talk my ten year old through panic attacks because she gets so anxious, or that my fourteen year old thinks I’m crazy to worry that she knows kids who are doing drugs or drinking. That my four year old just wants to be loved and feel super special all that time, and that my littlest monster, my only real recovery baby, has all sorts of sensory issues that bring me to tears all the time. They don’t know that my marriage is still not anywhere near where it used to be and that most nights I feel like I live with a stranger. Does this all make me a bad mom?

Can you chalk up every quirk my kids have and blame it on the fact that I’m a recovering alcoholic?

That there really was a time I was a really horrible mom? You could, but you could also say I have normal kids who are acting out for a number of reasons. I hold that guilt close to my heart and I do worry. I do take in every meltdown; I do sit at night and just cry because I worry that it’s all my fault. What I don’t do is let them know this. I try to tell them to take the good from the bad that while mom is a recovering alcoholic, that doesn’t stop the world. I teach them that everyone has something.

Our something isn’t a secret and there’s no shame in it. They did nothing to cause it, and that it does make us stronger as a family. I try to teach them not to judge others, to appreciate the little things, to try and understand that sometimes it’s ok to be angry as long as you say it the right way, and that not anyone of us are perfect. That’s what I wish people knew or saw when they hide from my family of seven walking down the isle of the grocery store; crazy toddlers and no nonsense teenagers.We are a family. We are quirky, we have problems, but we are good people.

This post originally appeared on Sober Mommies in August 2014.

Ginny is a mom and a recovering alcoholic. She’s been sober since November of 2011. She used to think she was a “chronic relapser,” but found sobriety and is so grateful for the support Sober Mommies has provided her.